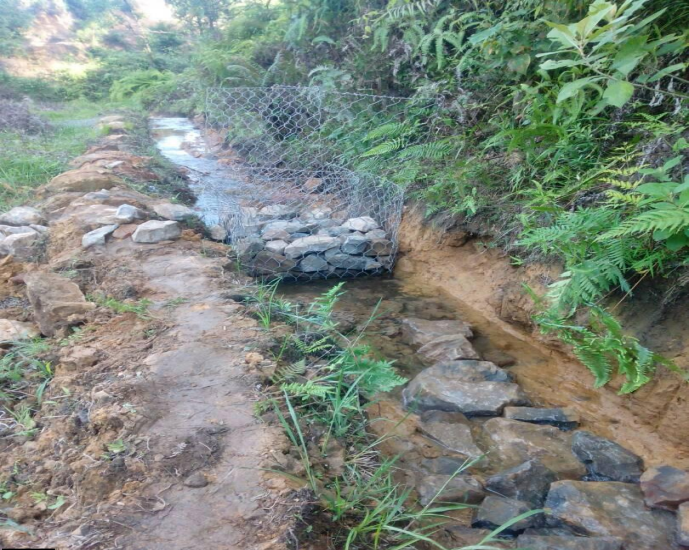 Decades of indiscriminate and unscientific mining has brought severe environmental degradation in the coal mining areas of Meghalaya. Large scale land cover/land use change and denudation of forest cover; pollution of air, water and soil; degradation of agricultural fields; and scarcity of clean potable water and other natural resources are some of the major environmental problems of the areas.

Acid mine drainage (AMD) generated from active and abandoned mines, coal storage sites and overburdened rocks is currently the main pollutant of surface water in the coal mining areas of Jaintia Hills, Meghalaya. The surface water bodies are badly affected by contamination of AMD originating from mines and spoils, leaching of heavy metals, silting by coal and sand particles etc. Pollution of the water is evident by the colour of the water which varies from brownish to reddish orange in most of the rivers and streams of the mining areas. Low pH (between2-5), high conductivity and high concentration of sulphate, iron and toxic heavy metals are some of the physicochemical parameters which characterize the degradation of water quality. Coal mining in Jaintia Hills, Meghalaya is not only associated with surface water pollution, but is also responsible for degradation of aquatic habitats and loss of aquatic life. The contaminated surface water has degraded the agricultural fields by making soil acidic resulting in drastic reduction of the agricultural productivity which forced the farmers to abandon agricultural activity.

In some areas of Jaintia Hills, people do not have access to clean water and hence are forced to depend on acidic water available in polluted streams. Lack of any post mining treatment activity and environmental safeguards make the fragile ecosystems more vulnerable to environmental degradation. In spite of serious environmental, health and socio-economic implications of AMD contaminated surface water in the coal mining areas of Meghalaya, very little has been done to tackle these problems. In order to find a solution to the problem of acidity, a field experiment was undertaken to improve the water quality of Moolawar stream in Mukhaialong village in the East Jaintia Hills District.

The Open Limestone Channel (OLC) using locally available limestone rocks was used to reduce the acidity of stream water. The OLC was found cost effective and technically feasible in rural areas to raise pH of stream water near to neutral, improve aquatic habitat and restore many aquatic flora and fauna in treated water. The Total project amounted to Rs.7.0 lakhs.

The project was initiated on April 11, 2017 and is being facilitated by Meghalaya Basin Development Authority (MBDA) and Integrated Natural Resource Management (INRM) which is an important component of the IFAD funded Megha-LAMP project.

Action Plan for the village committee:

An experimental site was to be selected by the community based on the following criteria:

-The water body should be perennial

-The water body should be acidic

-The treated water can be used for other domestic purposes

Advantages of this pilot project:

- The project was free from the use of chemicals

- It does not affect the ecosystem in a negative manner

- It is cost effective

- Can be easily replicated

The stream had been left unused for many years due to seepage caused due to coal mining activity. The ecosystem of the stream became red in colour and crystal clear due to high oxidation of pyrite and the quality of the water fell below the permissible limit making it unfit for domestic purposes. However, with the implementation of AMD treatment using Open Limestone Channel, the water now is rendered fit for domestic and irrigation uses. Similarly after a few months of continuous treatment, it was noticed that improvement in water quality paved way for reappearance of several aquatic species in treated section of the stream. Species of aquatic insects such as water penny and dragon fly and two species of fishes appeared in the stream. These life forms brought back some activity in the treated section of the stream. Growth of algae was also noticed in the treated section. This was an encouraging sign of eco-restoration of the stream affected by AMD.

With the implementation of AMD treatment using OLC the whole village community now has access to acid free water. Of late the water is being drawn by the village community using two inches PVC pipe under gravitational flow for domestic purpose including drinking.